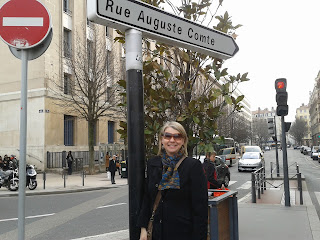 There I am, in Lyon, under the sign marking Auguste Comte street in Lyon.  Comte is often described as one of the fathers of sociology because his philosophy of positivism informed the developing field of sociology, by suggesting that social reality could and should be explained based on systematic analyses of empirical data, rather than by traditional beliefs and personal experiences.  Perhaps you notice in the photo also the red light and do-not-enter sign behind me.  I usually think of Comte as a green light kind of guy, you know, because he was a positivist, but the red light near his name can serve as a reminder to proceed with caution when we make generalizations about social life, to make sure that these are indeed grounded in empirical findings.  The red light and the do-not-enter sign could also be emblematic of something else, because when sociology was evolving as a scientific discipline, it was largely closed to women.  We have several 'fathers' in the field (Emile Durkheim is often named as the other one), but it is many decades before we can recognize any prominent women in the field. 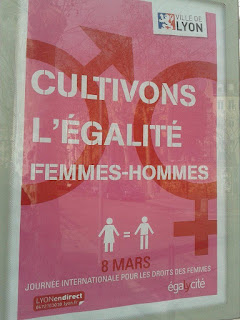 Today, the light is no longer red, but it seems to be stuck on yellow, as women's positions still lag behind men's, on all kinds of markers.  We have empirical evidence that affirms this for us.  Just last week, my SOC 101 students looked at the gender gap in pay for U.S. adults as reflected in the New York Times, and many of them, men and women alike, were dismayed by the gender gaps in virtually all fields, up to 40% in some.  (See http://www.nytimes.com/interactive/2009/03/01/business/20090301_WageGap.html) The story is very similar here in France.  Today is la journée de la femme, (international woman's day), a day that has official status in France in fact.  I saw signs on the street in Lyon encouraging the cultivation of gender equality and women's rights, (as shown on the pink poster), and the Olympique Lyonnais soccer club shop offered women a discount today on women's fan wear (alas, I don't wear much soccer fanware so the discount was not useful to me).  And the papers also noted the day.  Le Figaro, one of the national papers, offered two articles, one asking various people if such a day is still necessary and if it really advances the cause of women's equality (non seems to have been the general response).  Another article on the same page presents the latest findings on gender equality in France, and the title says it all, Les lents progrès de la parité (by Agnes Leclair, 8 March 2012, The slow progress towards equality).  The article presents a study from Insee, the institute for national statistics, that shows that French women earn 25% less than French men.  The income gap is similar to that in the U.S. if we refer to the data in the May 2010 New York Times interactive data noted above.  Family work comparisons on the other hand, show some interesting differences between the French and Americans, while also affirming some critical similarities.

For example, it seems that the French do more family work on a daily basis.  We can't compare different studies definitively as the measurements and the categories will vary between them, but the French study suggests that French women do close to 4 hours a day of family work, while U.S. women did about 17 hours a week in 2005, which would translate to about 2.5 hours a day.  That seems a little low for the U.S. while the French estimate is perhaps a little high (for U.S. data, see http://www.nsf.gov/discoveries/disc_images.jsp?cntn_id=111458&org=nsf ), but it does seem that French women do more family work than U.S. women do.  Another big national difference is that French men seem to not have progressed as quickly as American men have, in terms of their family work participation.  Since 1986, according to the L'Insee study, French men have added all of  6 minutes to the amount of family work they do, the daily rate today being about 2 hours 13 minutes.  U.S. studies suggest that U.S. men seem to have moved much more quickly, doubling their weekly hours of family work from 6 to 12.5 between 1976 and 2005.

Despite the national differences, French and U.S. women are very similar.  We see that French women and U.S. women do more than their national male counterparts, and we see that the most significant changes over time have been in terms of women's participation in family work, not in men's.  That is, the notable change is that French and U.S. women are simply doing less family work (and not that men are doing more).  Instead, women have given themselves a green light, to pursue other activities and other means for satisfying family responsibilities.  French and U.S. families today outsource more and more of the work, women are hiring childcare help (French women can use state-provided childcare services of course), gardeners, housecleaners, and they are shopping for prepared foods and other products designed to be simplify household work (robot vacuum cleaners, perhaps?).  Or, they are readjusting their standards, in childcare and in household cleanliness and in the quality of the food they prepare.  This is likely the direction we will continue in, in both France and the U.S.: women will do less, outsiders will do more, and men will slowly do a little more over time.  In that fashion, we may eventually reach gender parity, in family work contributions, and hopefully also in terms of pay.