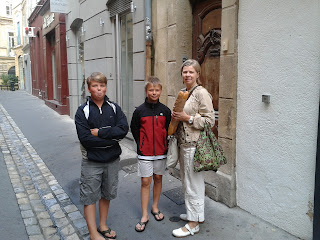 Many weeks ago, back in August, I wrote about the social niceties, the daily bonjours and bonne journées (have a good day greetings), and my appreciation of being greeted as Madame.  I am afraid I will have to qualify that appreciation now.

You see, unlike in my social and work circles in the U.S., it's rather unusual here to have a different last name than one's mari (husband).  While throughout much of Europe, women do keep their last names upon marriage, here in France, at least in the South, keeping one's name is not common.  I don't think I know a single French married woman here who has a different last name from her spouse, and the handful of women I have met here who have their own last names or hyphenated ones are in fact expatriates and not French at all (or they are not married).  A new French acquaintance actually thought Allen and I weren't married because of our different last names.  She assumed that we were in a concubinage (a legal status indicating unmarried cohabitants; as Allen pointed out, wow, that French word has very different connotations in its English usage, doesn't it?)

Where the name issue really has become apparent is in my dealings with la banque.  We finally went in two weeks ago to get my name onto the bank account, with our passports and marriage license.  We left with assurances that all would be ready in 10 days.  In less than that time, I began receiving mail from our bank that was addressed suspiciously to Mme Anne Carter and sure enough, my new bankcard says Mme Anne Carter and I'm sure the checkbook will too.  That is not my legal name, nor does it appear on ANY of my identification.  Only Allen's grandmothers ever addressed envelopes to me as Mrs. Anne Carter (or occasionally, as Mrs. Allen Carter).  Generational habits die hard, and I do know that my last name is hard to remember and spell.  But here in France, there seems to be an unspoken assumption that a married woman's identity is through her spouse, despite what it may say on the countless legal documents that she has to carry.  Allen has decided that I need a new i.d. card that identifies me as his femme (wife), just so I can retrieve his mail and the like, while another acquaintance, also with her own last name, carries her marriage license around with her!  To Allen's credit, he told the bank clerk that his wife is très libérale, to see if that would convince her that she really should change the bank records to reflect the legal name of her client's féministe wife.  Much to my surprise, this seemed to do the trick as the account now lists my legal name.


In many ways, this naming tradition reflects the persistence of traditional gender roles, here in the South of France and maybe more widely.  The same acquaintance who thought Allen and I were perhaps concubines, also pointed out that it's fairly unusual for married women here to show deep commitments to careers.  She suggested that for a married woman to put her career on the same level of her family (or higher) is anathema to most French.  Family is supposed to be the first priority for married women, and taking care of one's family is seen as a full-time job.  I can see WHY it is a full-time job, since managing daily life is just a bit more work here than it is in the U.S., but the social expectations that the work should be a woman's main avocation feel archaic.  My own free-lance teaching work is incredibly fulfilling and engaging and a large part of who I am, yet as I try to balance it with the expected women's work here, I frequently feel a bit inadequate by French standards yet resentful too of the expectations.  This past Wednesday, when the boys have just a half-day of school, I was pre-occupied with work all morning and ran out of time to prepare the boys' lunch, again, so my poor kids each had to have une sandwich au poulet (chicken sandwiches on a baguette) from the boulangerie (bakery), rather than the 3-course meal they are accustomed to at school.  Then, they had to take themselves off to sports trainings, one on foot, the other by city bus, while I did some quick housecleaning, all the while grumbling and thinking about how I'd rather be doing my teaching work.

The French have recently had national broader conversations about gender roles and expectations, especially in light of the DSK scandal (the former IMF director, Dominique Strauss-Kahn, allegedly sexually assaulted a hotel maid in NYC this past spring but the case was thrown out), and of the fact that DSK was replaced at the IMF by a French woman, Christine Lagarde.  I'm not sure if these conversations have led to any changes in attitudes or behaviors, as Lagarde herself seems to be presented in the media as much for her cool Parisian looks and fashion sense as for her political and economic stature.  (Incidentally, she took the name of her first husband, but did not change names when she remarried.) I am looking forward to having my own conversations with French women about gender roles.

I spoke with Pat Warren and she mentioned your blog from France. I quickly became a "follower" hoping that is okay with you. It sounds like you are having an exciting experience.
I have a blog too. It is not as literal and informational as yours but has lots of pictures. Would you be interested in seeing it? CollegeStreetCottage.blogspot.com Pat told me this morning that I have a few spelling errors. Please forgive me.