In contrast to my previous post, we have now noted some things and practices in France in our first week that ARE different from our experience:

**Our French housekeys turn in the door to the left to lock, right to unlock (forget righty-tighty, lefty-loosey), and you should see the old keys to our apartment and to the various cupboards.

**The garbage gets picked up EVERY evening, and we just leave it in a bag outside the front door after 7 pm. (Allen thinks the density of where we live makes daily garbage pickup necessary.) Recycling is possible, but I can't seem to locate the closest bins and our water bottle collection is growing.

**Parking and driving are relatively flexible endeavors. Check out the photo below of the parking job on the median into the local parking garage. That's one way to save some Euros!

**Here in the south of France, men and boys exchange cheek kisses as a standard greeting, la bise. (We noticed this in May when Saku was playing with two different soccer teams and as soon as the coaches showed up, all the boys lined up to greet their coaches, deux bise, one on each cheek.) Handshakes are rare.

**Tops at the beach are optional, even at the family beach at St. Croix, west of Marseilles. The boys didn't notice, but Allen sure did.

**Most stores are closed on Sunday. Allen says for some occupations, it's ILLEGAL to work on Sunday.

~~~
To be fair, I have to invoke Horace Miner now, an anthropologist whose famous Body Ritual among the Nacirema piece (1956) is required reading in my Introduction to Sociology course, see http://en.wikisource.org/wiki/Body_Ritual_among_the_Nacirema. In this piece, Miner describes the seemingly barbaric rituals of the Nacireman tribe, such as the strange cleaning and treating of the teeth, the hair-baking rituals and the brutal medical practices. Most of my students are quite disturbed as they read along in class. They become quite sheepish though when I reveal that they themselves are in fact the Nacirema (what's Nacirema spelled backwards?). This is Miner's trick, to show us that all cultural practices and beliefs are relative, that what we think is normal may not be so in another setting or to another set of eyes, and what is strange to one, may be perfectly normal to someone else. This realization is often an eye-opening one.

Here's what the French might see from their perspective:

**The Americans use boring keys that can be reproduced in a matter of seconds, and they turn to the right to lock. French keys are probably older than most of the United States is.
**In the U.S., the household garbage festers in the trashcan for an ENTIRE week before it is picked up.
**Americans have rigid rules about driving and parking, and pay too much to park their cars.
**Americans seem really uncomfortable with body contact, and greet each other with handshakes.
**Americans are uncomfortable with nudity.
**Americans never rest; they even work and shop on Sundays.

The point is that it's easy to see the 'other' as different or strange, and this often leads to judgments of quality, that our way is good and the other, different way is bad. Miner's intent in part was to warn us of such ethnocentric tendencies, by showing us how strange our rituals can seem to others. As my family observes, explores, and experiences France, we will do well to keep Miner's message in mind. 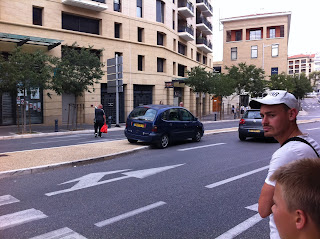 Thanks for the link. Looking forward to keeping up on how your adventure goes!

Allen mentioned you have this blog and I'm glad I found it! Good luck with your new adventure in France! We're moving to London on Monday, but only for the fall. -Katja A.