The ability to have leisure time and how one uses it are both sociological indicators of social status. In France, nearly all workers are entitled to 5 weeks of paid vacation a year so the ability to have leisure time is not a good marker of social status here, but the distinguishing factor may be HOW one vacations. The current issue of the Paris Match (18-24 August 2011) shows paparazzi photos of 'Les Politiques en vacance' (French politicians and government officials on their traditional August holidays). Sunbathing and boating at Corsica and St. Tropez, both here in the South, seem to be the most popular vacation pursuits of these rich and famous.

Seaside or village holidays are popular for the French of all social classes though, and we joined thousands of middle class French on the traffic-laden autoroutes heading north to our own seaside holiday, on the Friday of the August long weekend. (Monday, August 15 is a holiday on par with U.S. Labor Day.) We made a pit stop in Paris to meet up for an afternoon with our Seattle soccer friends, the K-D family, and while Paris may have been empty of its residents as it famously is in August, it was full of tourists, with whom we stood elbow to elbow at the Trocadero overlooking the Eiffel Tower at dusk.

Our ultimate destination was Grandcamp-Maisy, a small fishing village in Normandie, along the D-Day beaches of World War II. I had booked a resident-hotel unit, and both the hotel and the campground adjacent to it were packed. French, Italian, British, Dutch families, many with grandparents, were laden with crates of food, beach towels, and supplies to wash dishes and clothes. Many of the French campers with semi-permanent sites had fishing nets, buckets, and bicycles. The woman at reception said to us as we checked in, ‘Just 3 nights then?’ Clearly, we were supposed to stay for a good week, with sufficient supplies. We caught on quickly though and extended our stay by 2 nights and I made a mental list of supplies for next time. Maybe then we’ll try the chambres d’hotes or gites, where one can rent rooms on farms or entire houses.

Most of the vacationers around us were focused on getting their daily catch of mussels and other shellfish and on wearing their nautical shirts around town, while the focus of our holiday was history. We wanted to see the area where Allen’s grandfather had arrived during the Normandy campaign, with the 8th Division, on July 1, 1944, when the fighting was still very active and deadly. While the horrors he experienced are unimaginable, we saw the site of the artificial harbor that he undoubtedly crossed as well as the thick hedgerows through which the war was fought here. We visited three different museums about WWII and the Normandy Campaign, in Caen, Bayeux and Grandcamp-Maisy, the American and German military cemeteries, and the German battery and memorial at Pointe-du-Hoc, and had lunch one day at Cherbourg-Octeville, a port city largely devastated by the war.

Such a heavy pursuit of WW II history was balanced with swimming, at the pool or in the English Channel (Omaha Beach despite its history as a gruesome battlefield is an extraordinarily beautiful beach called Vierville-sur-mer), with sightseeing, in the picturesque town of Bayeux where we saw the famous 1000 year old tapestry that depicts how William, Duke of Normandy became the King of England (remember the Battle of Hastings in 1066?), and with a great deal of eating. We sampled the local ciders and Calvados (apple brandy) and the delightful owner of La belle mariniére introduced us to the local oysters, shrimps and mussels.

Some French are still on holiday, but we ended our first French holiday this past Friday, with an 11-hour cross country drive through the Loire Valley and the center of France all the way to our new home in Aix. It’s quite hot here now, 31 degrees (low 90s), but we’re rested and well-fed and in good shape to slowly prepare for the start of school on Sept. 5. Let's hope that the French government heads are equally rejuvenated from their vacances and are ready to get back to running the country. 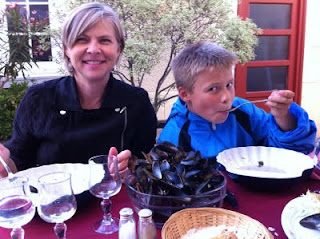