The French call a heat wave une canicule, and the central part of France is suffering from one at the moment.  Météo France has the yellow alert showing on its map, while NE France is on orange alert for severe thunderstorms, and we in the southeast, where it is hot, hot, hot, (34-36 degrees, or mid to high 90s Fahrenheit), do not have any particular weather warning. My body tells me though that if we are not quite at a canicule we must be close, as I seem to have contracted an often heat-related illness, a kidney or urinal tract infection.   Unbeknownst to me, these are more common in hotter climates due to the dangers presented by dehydration, and some even predict we may see an upswing in such illnesses with global warning.  (Here's one article about this, "Could Global Warming...." Scientific American 2008).  I wonder how the French avoid dehydration because it seems like all they drink are small coffees, glasses of wine, and water just at mealtimes.  (And I won't go into the paltry and often archaic public toilets.)  As for me, I'm back to the American habit of lugging a water bottle around with me (something the French just don't do), and then there is the small matter of avoiding the sun (in Aix?) and sports while on medication.

The reason we do not have a heat wave warning here despite many days above 30 degrees is that the definitions of a heat wave are subjective, and are often geographically and culturally distinct.  According to the French definition of a heatwave, the temperatures for day times must be above 30-35 degrees and the night time temperatures must exceed 18-20 degrees, for more than 3 days.  This definition is presented in terms of health, as the French look to the nighttime temperatures to see if these get cool enough to bring relief to bring down body temperatures, whereas definitions elsewhere seem to focus on a consistently high daytime temperature.  (See this discussion in French, in Futura Science magazine.)  I presume that the nighttime lows have been low enough here in Provence to avoid the designation of canicule, and that we must need to reach a higher temperature reading than say Cherbourg, in the north of France, before we qualify for the designation. Otherwise, I supposed we'd be in heat wave range every week here.  In any case, the national weather service points out that heat wave designations are rarely made (Phénomènes Météo, Les Canicules, Météo France).  Wikipedia offers some interesting examples of the subjectivity associated with heat wave definitions, showing that high temperatures above 100 degrees Fahrenheit qualify for a heat storm in California, for example.  I particularly like the Swedish definition, of 5 or more days above 25 degrees (77 degrees Fahrenheit).  That just about matches my personal threshold for heat, yet it would be very funny to the Aixois to think that such a low temperature could qualify for a heat wave.  Heat wave or no, we are surviving the current heat with fans blowing throughout our apartment, and by drinking copious amounts of homemade granitas with our cute Magic Freez' mugs.  (Congelez, pressez, dégustez! Freeze, press, and enjoy!).  And this weekend we escape to the north ourselves, where we will gladly take a Finnish heat wave or something less dramatic, just to cool off for a few days. 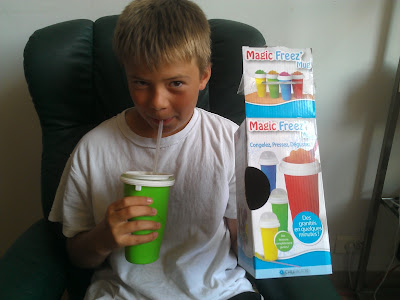