In sociology we speak a great deal about the symbolism tied to our social roles and to our interactions with others.  How we name things and refer to them is also symbolic, as language signifies all kinds of social meanings, for the people, objects, or actions to which we are referring.  The names we give our social roles--mother, father, daughter--have symbolic meanings tied up with them as do the names we give ourselves.  I can use myself easily here as I have not only firmly held on to my name upon marriage, but I have also maintained its Finnish pronunciation for much of my life.  Both the name and the pronunciation are symbols for me, of both my ethnolinguistic identity and my feminist orientation, that I affirm to myself and project to others.  I've already talked about my surprise and frustration with the challenges in using my legal nom (last name) here (see Une féministe, October 9, 2011).  By now, it's on the bank account and checkbook, and on one utility bill (thanks to a clever French friend who suggested I open one utility in my name and the other in my spouse's).  I am still the good wife with her spouse's last name on the rental agreement, and the spouse receives all school correspondence, even though I am the parent who signs every single absence or late attendance/early arrival slip and who attends the school meetings and conferences and corresponds with the school staff.  His name is also on my cell phone bill (because I did not have a utility in my name at the time we set it up).  As for my first name  I have generally always introduced myself by pronouncing my first name as it is pronounced in Finnish (on'-neh), but strangely enough, in France, this works about as well as it does in the U.S.  The French consistently refer to me as 'Ann' because that's also how they pronounce a name spelled as mine.

Despite these little challenges, in one significant way, the French have made a big change just this week in how it names its people.  The use of Mademoiselle (Miss) on any government documents will no longer be permitted; French women will no longer have to signify their marital status by selecting Madame or Mademoiselle on government forms.  Instead, all are Madame, like men are all Monsieur.  This is akin to the U.S. convention, of using Ms. as the honorific for all women.  All of the teachers in our boys' elementary school were called Ms. unless they expressly indicated a preference for Mrs.  To be fair, in France despite what we learned in our French 101 classes back home, Mlle (the abbreviation for Miss) has not been widely or practically used in some time.  In the fall, I made the mistake of addressing an unmarried school official as Mlle So-and-So in an email (because I heard someone referring to her as such), but she swiftly and professionally corrected me, and I've come to notice that any women from their 20's on are generally called Madame.  As the New York Times calls Madame the 'senior' honorific, it is a little jarring to me to hear a young college student being called Madame, but that is the moniker here and apparently also in Quebec for unmarried and married women alike. (http://www.nytimes.com/2012/02/23/world/europe/france-drops-mademoiselle-from-official-use.html 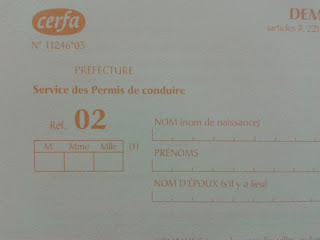 The French government though apparently will not be rushing to make new forms.  The New York Times article linked here notes that in not wanting to waste the old forms, the government will create new ones after the old ones run out.  On the one hand, that makes sense during this challenging economic time in Europe where the French government along with its neighbors is trying to save the Euro currency by limiting public sector spending, but there is something symbolic, from the perspective of gender equality, in making the change immediately apparent.  I will have a good opportunity in the next few months to see if the government recognizes this symbolic opportunity, as the spouse and I will need to see about getting our permis de conduire (driver's licenses).  (We have just one year in which we can use our American ones here.)  One rendition of the current application asks one to indicate one's status as M., Mme or Mlle, which will obviously change with the new forms.  The current form then asks for one's last name at birth, one's first name and nom d'époux (s'il ya lieu) (married name or literally, husband's name, if applicable).  Apparently, this literal reference to one's spouse will also be removed, from this line, and one will simply be asked to indicate the last name being used now.  From my perspective, this latter change may be the more significant one!
Posted by Anne Tuominen on Friday, February 24, 2012